Meet the People Behind Snitker Goldens

"We not only have the privilege of working with these incredible Golden Retrievers on a daily basis, we do it as a family. Our passion in the Golden Retriever is the relationship - whether that be as Companion, Service, Emotional Support, or Therapy dogs."
- Rhonda Snitker 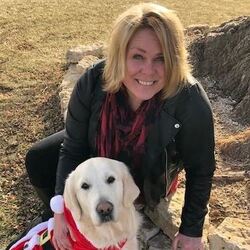 Rhonda has lived with animals for over fifty years and began raising Golden Retrievers in 2001. As a professional artist with a master's degree in Art Therapy, much of Rhonda's skills and excellence in this area uniquely equip her with the tools and ability to nurture and raise an exceptional puppy. Though every puppy is different, just as in children, each Snitker Golden puppy raised in The Imprint™ program under Rhonda's watchful, guiding care, has the same desire to connect with their human handler. It is a resounding theme within her program: the relationship-centered approach to raising and training Goldens.

Rhonda's primary role in overseeing puppy health, and management during critical imprinting weeks (0-8) before puppies head home to their forever families. She also loves the artistry that goes into selecting future breeders for the program. Rhonda is passionate about the working Golden, focusing on continuing education to improve the Snitker Goldens team members' skills. She especially enjoys her beloved adult Goldens and watching them mature into her close companions.
Fun Fact: Rhonda's first dog was not a Retriever, but instead, a Springer Spaniel, when she was a teenager. She ultimately fell in love with the Retriever when she and her husband brought home "Mandy" for their oldest son. 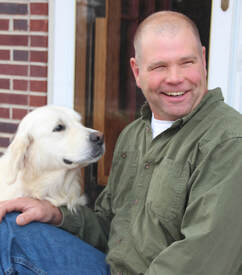 Todd is the perfect partner in this business of working with the dogs.  Besides being married to Rhonda and being part of the breeding program since its inception, Todd has a BS in Animal Science at ISU, and has been working with animals all of his life.  Todd brings his perspective in genetics and animal management, his skills in carpentry, his ingenuity in design, and his overall "fix-it" ability that the family often refers to him as "born-knowin'".  His insight and opinions on animal management are a highly valued part of our program.  Even as Todd has been here since Snitker Goldens' beginning, he has "officially" been added to our employee roster in 2019.  He can often be found calling Rhonda, "Chief" or "Boss" with a glimmer in his eye.  Keeping things light is one of the things he does best!

After spending over 35 years building their dairy business, Todd is stepping aside a bit on dairy responsibilities for their two sons (and their families) to take over the daily of that job.  Stepping aside is a loosely-used term at the farm, for Todd can be found building and fixing in both businesses!  But his everyday work is now daily with his wife, Rhonda, as the two of them continue to press forward to improve what they do in the breeding and raising of Golden Retrievers.

Fun Fact:  Todd always said he'd never have a dog in his home. Now, on occasion, he has dogs on his bed (compliments of Rhonda!)